Every business leader worries about the same thing: Are we moving fast enough?

We can no longer talk about months and years, instead, we need to talk about what can be achieved in hours and weeks.

We also must be very careful not to waste precious time and resources pursuing untested ideas. Since the compulsion to keep going grows exponentially with the amount of time and money invested in something it is critical to develop a method of validating ideas as quickly and cheaply as possible. 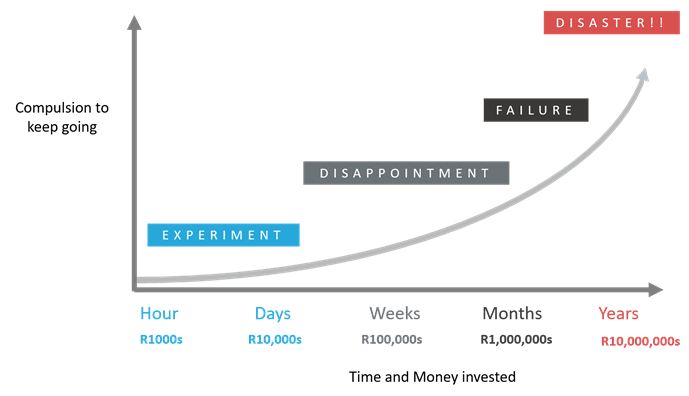 This is where the FFWD Sprint comes in.

An FFWD Sprint is the fastest way to test if an idea or solution is “THE RIGHT IT”.

What is an FFWD Sprint?

The FFWD Sprint is roughly based on the Design Sprint framework explained in Jake Knapp’s book: “Sprint” released in 2016, which has since helped hundreds of Silicon Valley and Fortune 500 companies to successfully launch multi-million-dollar products and services.

Combining the best practices of Design Thinking, Lean UX, Agile and behavioral science Knapp created a clear, efficient, rapid, and adaptable framework to reduce risks of innovation, align teams on the same vision, and eventually save money and time (up to 6 months according to most practitioners).

Since the release of the book, we have refined the Design Sprint framework by experimenting with hundreds of startups and corporate teams to improve its efficiency and value.

Each FFWD Sprint is slightly different depending on what the client wants to achieve and how much time is available but generally moves through three phases:

(1)   learn about the problem and understand the context;

(2)   generate many possible solutions to test;

(3)   build a realistic prototype or mock-up and;

(4)   test with customers or key stakeholders.

During the Sprint Planning workshop participants start by documenting the background and context of the project. The long-term goal, key questions, assumptions to be tested, and desired outcomes are also captured. The team then decides on topics to research and the subject matter experts that should be consulted. Lastly, the logistics of the sprint are ironed out including who will participate full-time and who is only required part-time as well as whether the sprint will be run face-to-face or virtually. Typically, the core team is between 5 and 8 people.

Apart from some admin work the sprint preparation mostly involves conducting research and interviewing customers and subject matter experts to learn more about the problem.

Day 1 is all about finding the right problem to focus on and multiple solutions to address it.

During the morning of the first day, the sprint team will learn about the problem, and possible solutions, by listening to Lightning Talks prepared by the sprint team members playing back what they learned from their research and interviews. External subject matter experts can also be invited to share their experiences in Lightning Talks. While engaging in the talks, team members take notes in the form of ‘How Might We?’ questions (HMWs). HMWs encourage open, unrestrained thought. Some examples of HMWs:

To organize everyone’s ideas, the HMWs are then themed and the team votes for the most important HMW questions to answer. 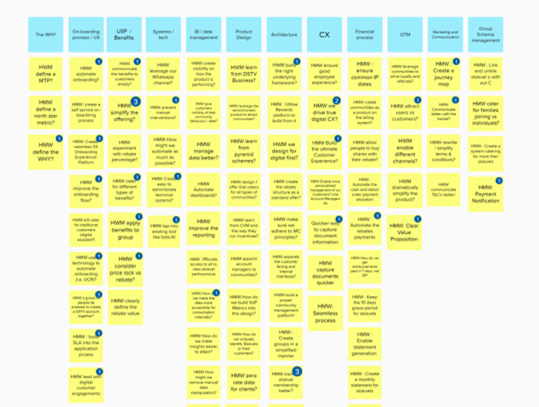 After lunch, it is now time for ideation. Armed with the knowledge gained in the morning and guided by the HMWs, each team member works individually to sketch out what they believe is the best solution.

Day 2 is focused on choosing the best solution and refining it in detail.

Working from their rough sketches, the participants start the day by and compiling their solutions into storyboards with as much detail as possible. Next, each team member is given a chance to pitch their solution storyboards to the team. The team asks questions, critique the solutions and then vote for the best ones. Ideas from other storyboards are often combined with the winning storyboard to create a master storyboard. 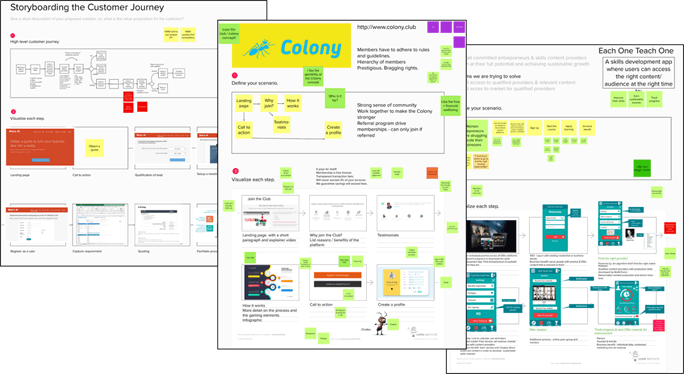 Day 3 is solely dedicated to building the prototype.

The team divides this task taking on separate roles based on skillsets. The team aims to create a “facade” of the future solution. On one hand, it should look good enough to be convincing for the customer or whoever the end-user or beneficiary of the sprint output would be. On another hand, the functionality should be minimal, focusing only on testing the main hypothesis of the Sprint.  A prototype is anything that enables you to test your idea in the real world so you can learn. 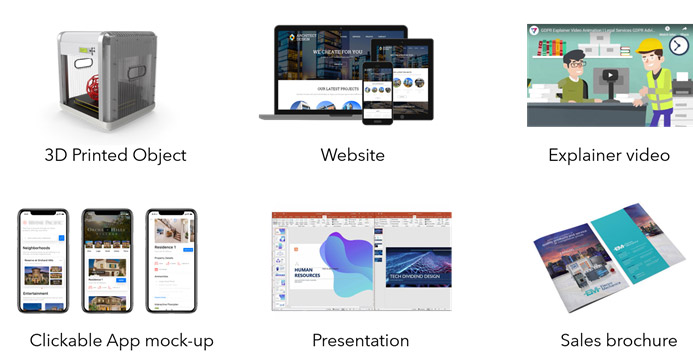 Day 4 is dedicated to the user-tests.

During the final day of the Design Sprint, the sprint team will test the prototype with customers, end-users, or stakeholders and carefully document reactions. This may involve pitching the solution to internal or external customers or measuring the conversion rates of an online or email campaign. During the testing session, team members carefully take note of what is working and not working to gain insight into how to improve the concept.

After the sprint, the sprint team will summarise and analyze the results and based on the data collected, decide to pivot or persevere. The team might decide to run another round of testing if the results were not conclusive or continue to a proof of concept with a larger number of users.

It is important to realize that the greatest value from running FFWD Sprints is derived when bad ideas are killed quickly. With Fast-Testing embedded in your sprint, you can afford to test many new and innovative ideas in a very short time. Then you can find the ones that are most likely to succeed and not miss any opportunities. 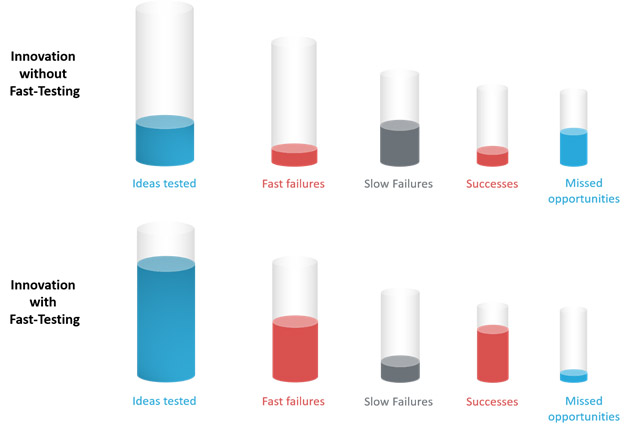 What can an FFWD Sprint be used for?

Originally the Google design sprint process was developed to test new product ideas with a specific focus on UX design, but we have adapted it to solve just about any problem.

The FFWD Sprint can be used to speed up decision-making in any area of business, from strategy formulation to product development and marketing.

The key benefits of running FFWD Sprints are: